The Complete Guide To Mastering The Zoom Burst Technique

Anything that moves while the camera’s shutter is open will blur. It’s a simple photographic concept, but results in some advanced techniques, like panning along with the action, for example. But what about when the subject isn’t moving? That’s where the zoom burst technique comes in.

The zoom burst technique doesn’t require a lot of fancy equipment, but you will need a DSLR or mirrorless camera with a zoom lens. The technique can be used without a tripod. A tripod will result in a more uniform blur, and so, is usually preferred. The technique can also be used with a rear curtain flash, though that’s optional as well.

The most important camera setting to get right for the zoom burst technique is the shutter speed. The shutter needs to remain open while the lens is zooming. If it is too short, and you won’t get much of an effect. Usually between one and four seconds is a good shutter speed for a zoom burst. The technique often requires a bit of experimentation with different shutter speeds, depending on how fast you can zoom and how much of the effect you want.

Using the shutter priority mode will allow you to just focus on adjusting the shutter speed (and sometimes the ISO as well). The zoom burst technique can also be used in full manual mode, if you’re comfortable with manual. Use an aperture and ISO that will balance out the exposure for the 1-4s shutter speed. The longer shutter speed usually allows for low ISOs, to prevent noise. Don’t worry much about your depth of field. The zoom burst will render much of the image to a blur anyways. Simply find an aperture that balances out the exposure with your desired shutter speed and a low ISO. 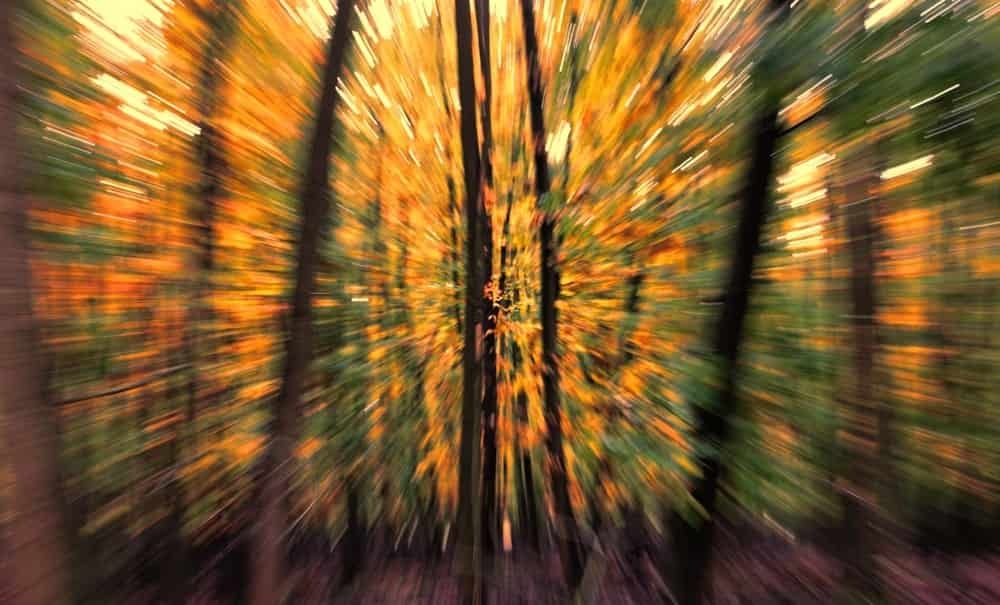 Compose the image with the camera lens set to its widest angle, including the elements you’d like within the frame. Keep in mind, the outer edges will be more blurred than the center. The zoom burst technique works great for still life subjects. Keep an eye out for colors and patterns, which also tend to be enhanced with this technique.

For a more uniform effect, set your camera up on a tripod. The tripod will help keep the blur in a straight line radiating out from the center of the image. If you shoot handheld, the blur radiating out from the center may not be perfectly straight, but that can make for a nice effect too. If you decide not to use a tripod, you’ll still need to find a steady way to hold the camera, like by propping your elbows up on a table.

Next, zoom all the way in to set your focus. So that the focus doesn’t change during the shot, you can use the autofocus, then switch to manual. Just be sure not to move your camera or the subject, or you’ll end up with a shot that’s out of focus. You can also use the focus lock button instead, if your camera includes those features.

Now, zoom back out to the widest angle. You are now ready to take the shot. Press the shutter release, and zoom in with one fluid motion while the shutter is still open. Ideally, you should zoom with a consistent speed, then stop zooming just before the shutter closes again.

Don’t worry if you don’t get the shot on the first try. The zoom burst technique takes a bit of practice to master. Try again until you’re able to zoom in a smooth motion for the effect you want. You may also need to lower the shutter speed to get more of that radial blur.

Variations on the zoom burst effect

Like any creative technique, there’s more than one way to use a zoom burst.

Instead of zooming by turning your camera’s lens barrel, hold on to the camera lens barrel and turn the camera instead. This will create a spiral effect, instead of the straight blur zooming out. Since the whole camera is moving, you won’t be left with a clear center, however.

A rear curtain sync flash, or the flash setting that fires at the very end of the exposure, can add some light in if you need.

While the zoom burst technique may look advanced, it’s actually quite simple. Getting the camera to zoom in one smooth motion may take a bit of practice, however, but it leaves you with a great effect. Since it works best with still subjects, you have plenty of time to practice until you get the shot just right.